On Monday, June 27th, four members of the Guardians of Justice traveled into idyllic Eustis to visit Camp Boggy Creek. Boggy Creek is a week-long summer camp that seeks “to foster a spirit of joy by creating a free, safe, and medically-sound camp environment that enriches the lives of children with serious illnesses and their families.” And from their sprawling campus to their cheerful volunteers they truly do just that! 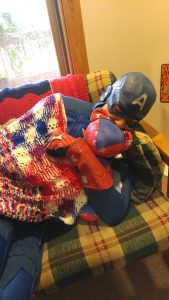 roes via golf cart to the camp’s mess hall for a breakfast visit with the children.

Sarcoma is a cancer of the connective tissue in the human body that is considered rare but while rare is still more likely to affect children and young adults than it is full grown humans. According to the American Cancer Society 11,280 people will be diagnosed with Sarcoma yearly. (Citation) There are many different types of soft-tissue sarcomas and treatment varies for each. Although referred to as Pediatric Sarcoma the three main types of Sarcoma affecting children can also affect adults. These three types are:

Rhabdomyosarcomas –this is one of the most common types of sarcoma and causes tumors to grow in the skeletal (striated) muscles.

Guardians of Justice were invited to attend the annual event “Make ‘em smile” presented by Nathaniel’s Hope at downtown Orlando’s Lake Eola park on Saturday, June 4th. The day was warm and muggy as five characters gathered at Bright Start Pediatrics’ tent to take photos and interact with the children. 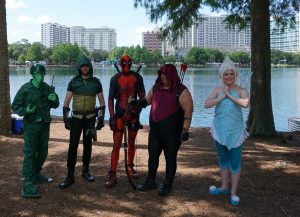 Nathaniel’s Hope has been hosting this annual event for fourteen years now and Guardians of Justice has been in attendance for three of those wonderful 14! We saw so many familiar faces from years past!

This event is special because everything is set up with VIP Kids and their extended families in mind.

A Super Friday for BrightStart Pediatrics

In the morning of May the 27th a handful of members of the Guardians of Justice stopped by Bright Start Pediatrics for Super Friday! This not so ordinary Friday is a yearly event where patients and staff get to celebrate being super by dressing up and having fun! 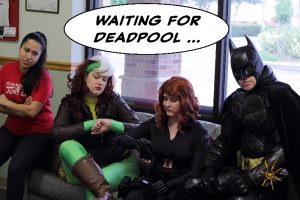 Our visit was off to a rocky start as three heroes and their Smile Maker, Vanessa, waited for what seemed like forever for Deadpool to finished getting ready. As you can see from the photo, we were not amused.

Once Deadpool arrived everyone headed to the infant room to spread some smiles!

With our organizations one year anniversary (since relaunching in April of 2015) came an amazing and exciting new development: Guardians of Justice is a federally recognized 501c3 nonprofit organization.

What does this mean for our Volunteers? Volunteers who itemize their taxes can speak to their personal accountant about eligible deductions for attending our events. Including mileage!

Cystic Fibrosis Awareness is the Focus of May

May is Cystic Fibrosis Month. Cystic Fibrosis is a rare genetic disease that causes persistent difficulty breathing, lung infections, and a buildup of mucus that may prevent organs from functioning properly (particularly in the digestive system). Currently there are approximately 70,000 people worldwide living with CF.

Because Cystic Fibrosis is a genetic disease the risks of a child being diagnosed with it increases if both parents are ‘carriers’. Scientists currently estimate that twelve-million Americans are currently carriers for CF (Citation). When both parents are carriers of the CF gene there is a 25% chance (1 in 4) that the child will be diagnosed with CF and suffer symptoms.

On Saturday, April 9th characters from Guardians of Justice joined the Autism Society of Greater Orlando for their Autism Walk & Family Fun Day at the Orange County Convention Center. Participants in the 5K walk had to circle the North Concourse nine times (that’s a LOT!) to complete their pledges.

During opening ceremonies the Guardians were joined by puppeteers to listen as sponsors were thanked and awards were announced. The Orange County Sheriff’s office Honor Guard presented the colors as a wonderful rendition of the National Anthem was given by two young participants.

While the walk was in progress there were plenty of booths set up with activities,

Even a cloudy day couldn’t dim our smiles.

Guardians of Justice were extremely happy to be invited back to the Autism Family Fun Day at Central Florida Dreamplex in Clermont, Florida. On Saturday, April 2nd 2016 an array of characters assembled to partake in the festivities. 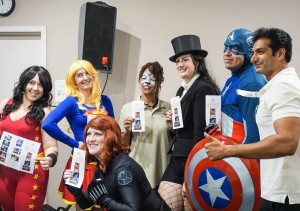 We saw many of the same faces from last year, including some furry friends like Winkie –the Autism service dog from Dream Acres for Autism and Rommy –a miniature horse with a great mission to help people (we first met him at the Autism Burns Fire Fighting event in Orlando!).

Autism spectrum disorder (ASD) and Autism are both terms for a relatively new type of developmental disorder. “These disorders are characterized, in varying degrees, by difficulties in social interaction, verbal and nonverbal communication and repetitive behaviors.[…][A]ll autism disorders were merged into one umbrella diagnosis of ASD.” (Citation)

ASD emerges early on in a child’s development, usually presenting around 2-3 years of age and is almost five times as common in boys as it is in girls. ASD is also more common in children with another type of genetic or chromosomal condition per the CDC:

See a Hero, Be a Hero: Benefiting Muscular Dystrophy

Right next to the lawn mowers and across from the light bulbs isn’t usually where you’d expect to find a group of unlikely allies but on Saturday, February 27th at the Lowes of Auburndale, that was exactly where a few members of Guardians of Justice could be found. We were so happy to be invited back for our second See a Hero, Be a Hero event. 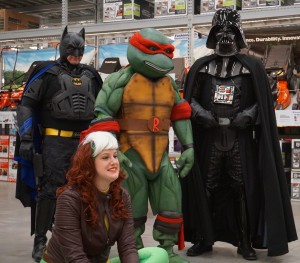 Joined by “Elsa of Auburndale” they spent the morning talking to, and posing for photos with, local patrons of the store. Darth Vader and Batman were definite hits among the employees,