On Saturday, April 9th characters from Guardians of Justice joined the Autism Society of Greater Orlando for their Autism Walk & Family Fun Day at the Orange County Convention Center. Participants in the 5K walk had to circle the North Concourse nine times (that’s a LOT!) to complete their pledges.

During opening ceremonies the Guardians were joined by puppeteers to listen as sponsors were thanked and awards were announced. The Orange County Sheriff’s office Honor Guard presented the colors as a wonderful rendition of the National Anthem was given by two young participants.

While the walk was in progress there were plenty of booths set up with activities, including a booth that twisted balloons into animals, hats, and even swords! Rogue and a little boy had a mock sword/fist fight (where she died elaborately, his balloon sword embedded in her side). Rogue’s teammate Pixie fake sobbed over her death and he erupted into a fit of giggles. 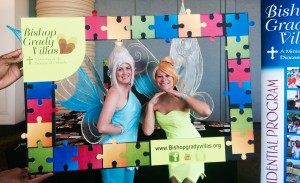 Pixie was excited to not be the only winged creature as sisters Tinkerbell and Periwinkle flittered about the crowd, stopping to spread cheer to all the children. For Fairies are so small they can only feel one emotion at once, and that day it was all happiness!

Wonder Woman and her sister Wonder Girl were also on hand, showing participants the Amazon’s peaceful side as the warriors posed for photographs and discussed the best hero poses. Green Arrow and Hawkeye grouped together, keeping sharp archer’s eyes out for any possible trouble -bow and arrows at the ready.

Batman and Cyclops compared crime-fighting notes and the Dark Knight scoured the crowd for a new Robin. He even keenly watched a few kids with joker colored hair before Rogue convinced him the green was just for fun.

At one point in the day two small children went missing and the convention hall sprang into action. Batman and Arrow went to search outside as vendors and volunteers looked beneath tables in the hall. The rest of the heroes and fairies continued to play with and distract the remaining children until the missing youngsters were found safe!

In the DJ area was a huge parachute staffed by volunteers to keep it moving as kids sat in the middle and played with the bouncy balls. Storm Troopers from the 501st danced with the children as the Sheriff’s Office flicked the lights off and on the Segway and Motorcycle they brought for photo ops.

Hula Hoop competitions were also conducted as the characters danced and cheered on the participants. There were smoothie samples and even a separate concession area with pizza and drinks! Children had candy and other sweet treats from the vendors as parents acquainted themselves with local companies and organizations.

A very fun morning was had by all and the Guardians look forward to next year’s walk!