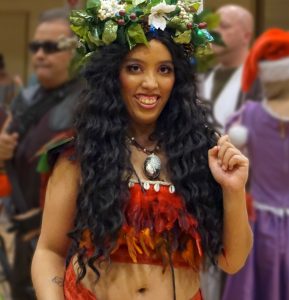 My first event was last December at a BASE Camp Christmas party. I was honestly terrified, I have a history of not really understanding children or knowing what to say to them. Plus, this was mostly a superhero event and here I was dressed as Moana, while heroic, NOT a superhero. I was afraid Moana wasn’t going to fit in, it was my first character approved into the group.

I also don’t usually do well around sick kids. I was expecting hospital masks and IVs and shaved heads that may be expected around children battling cancer, definitely a bit uncomfortable for me as Moana has SO MUCH HAIR. On top of that, I had only met one of the Guardians out of the 8 or so that were attending. 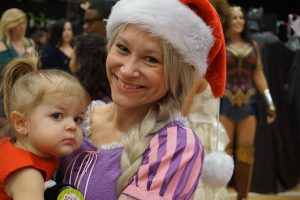 When I got there, I was already in costume having just gotten back from a convention earlier that day – Holiday Matsuri. The front door opened up to a lobby which was opened up to the party, and I was trying to be stealthy as I didn’t want to ruin the surprise. Was it a surprise? Did they know these characters were coming? Were they going to ask me how to hula? All this was going through my head as I was touched on the back lightly by a Guardian Handler who guided me to an elevator and up a walkway. I could see all the kids down there and a couple looked up at me in awe, I quickly tried to hide my face.

Once in the room, it was a sigh of relief. Everyone was in costume! Batman, Wonder Woman, Superman, US Agent, Deadpool,  Spider-man, Hawkeye, Thor, Orson Krennic from Rogue One, a Jedi – even Rapunzel and Kevin the Minion. I quickly shuffled over to be with my “Princess Sister” waving to everyone and smiling to the one person in the group I actually knew. I could relax a bit after adjusting to everything. She even had more hair than I did!! 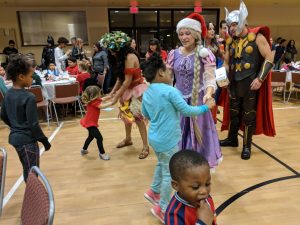 Finally, it was time to go out and I made sure to stay by Punzie the whole night. Now, I must note, I usually have my own handler for events but she was not yet signed up for the GoJ, so I still felt kind of alone and unsure. When I got down there, there were no shaved heads, no IVs, nothing. Just a lot of happy kids and A LOT of presents. The group immediately split their separate ways but I stuck close to Punzie. Princesses do that, right? Most of the time I’m used to taking pictures with people just below my shoulder in height, sometimes taller, never anyone waist and shorter. So, it was disconcerting to have to remember to look down, or feel a little tug and try to be as princess-y as possible as I spin around to find out who was trying to get my attention.

Punzie was great, she pointed out kids to me and told me stories. Saying she had to act like she didn’t know some of these kids as she was usually Tinker Bell, and “Punzie” had never been to this event so she had to act like it was her “first time” too. 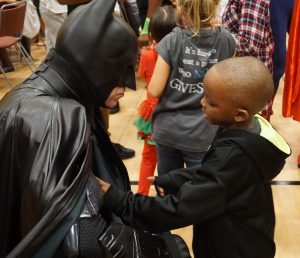 Several kids wondered why my necklace didn’t open, I told them that I closed it tight after everything that happened. They asked me where the heart was. I opened a coconut shell purse I would have on my hip and pulled out the heart on a necklace string, telling them that Te’fiti is allowing me to borrow this for the night, just to show it to them. They would put it on, then they would quickly take it off themselves, not wanting to anger Te’fiti.

All in all, it was an amazing night and I can’t wait to do it again!!

BaseCamp Children’s Cancer Foundation is on a mission to provide a year-round series of programs for children and families facing the challenge of living with cancer, and other life-threatening, hematology related illnesses. They provide programs such as Hospital meals, milestone parties, food baskets, parent support groups, overnight camps, and 2 wishes.