Gotham’s ” Batman ” and Avengers ” Hawkeye ” from the  Guardians of Justice , were requested to visit and honor a very special person for the Cub Scout Day Camp in Clermont. 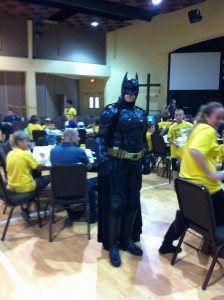 Traveling in a stealth Bat cruiser , we came upon a church in their beautiful city. Greeted by our contact Elizabeth, we were given an update of our mission. Today, we were asked to give an award to anEMT made by the Scouts, who goes above and beyond the call of duty to be a hero. Batman and I waited for our cue , as Elizabeth announced seeing the ” Bat Signal” Batman  kicked open the door and walked in with Hawkeye being introduced next while hearing  the loud accolades of wonderful young faces. After a small speech mentioning this gentleman’s great service, we walked the tables and talked with the young men and women having lunch. High fives and photos were at every turn, with myself mostly being asked about archery and the HULK.

After lunch, a demonstration of K-9 force was shown by the Clermont Police Department Drug Division. A black lab showed it can  find drugs from 6 box 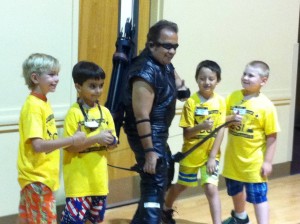 es , while the officer explained how they are trained. It did take the canine 3 attempts to find the right box, but ” Max ” the K-9 was too excited being around batman.  After the show, Elizabeth asked the Scouts about who to call in an emergency. A large burst of voices screamed ” Batman! ” with the officer looking astonished. But the correct answer was given when they were told Batman stays in Gotham. Many more photos were taken with a large Q&A afterward.

As Batman and I stood in the middle of the auditorium, watching the Scouts leave to finish their day. A large groups of Scouts screamed ” Good Bye Hawkeye! ” which made my day .