We’re so proud of Jim Moore and his recent feature in the Polk County Sun, brining to light his amazing ability to make kids smile through his passion of bringing amazing characters to life. We’re so happy to have Jim with us and are always excited to have him join us at events.

Cosplayer has a heart for kids 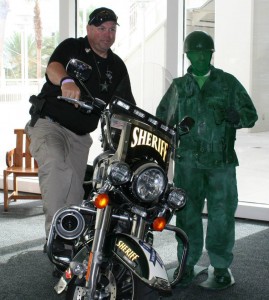 Editor’s note: You might remember our Toy Green Army man from our photo essay about the Trunk or Treat at Beymer United Methodist Church in Winter Haven. We decided to get to know him and introduce him to you.

There are people who wear costumes for a special event, and then there is “Cosplay.”

A combination of two words, costume and play, those who belong to the Cosplay culture wear costumes and fashion accessories, usually which center around a specific character.

Fifty-six-year-old Jim Moore works at Lowe’s Home Centers in Auburndale. He started out working for them 26 years ago in Virginia, later moved to Texas when they expanded nationally, and finally, in 2009, landed in Florida.

He and his wife, Carla, have been married 36 years and have two sons and a grandson.

Moore says he is actually “pretty new” to the Cosplay community. In August 2013, he attended his first convention.

“It all started when I came across a 66 Batman forum a year earlier (www.66batman.com). I always had a special fascination with the Batman show from 1966. My father and I would watch it together when he wasn’t working. I saw that members had constructed their own Batman costumes and I had to have one too,” he said.

So after doing a lot of research, he says, including seeking advice and input “from a lot of people,” he and his wife finished Batman in time to attend their first convention.

The next step, he says, was to see how Batman could get more involved.

“That’s when I found about several groups that did charity events, hospital visits and fund raisers. We saw this as an opportunity to do more,” he adds.

The Moores stay active in Cosplay.

They are currently involved with the Guardians of Justice Inc. Heroes Alliance, M.U.C.H. Foundation and Costumers With A Cause.

Is there any part of his personality that especially loves being in costume?

“Being in costume means being that character,” Moore says.

“The one rule groupshave is to maintain the ‘magic or illusion’ in every way possible for the children. Once I’m in character, I just have fun with the kids. Who doesn’t want to be Batman?” he says.

At conventions, he says, you can relax more and talk about costume making or seeing a panel.

Cosplay is something he and his wife enjoy. 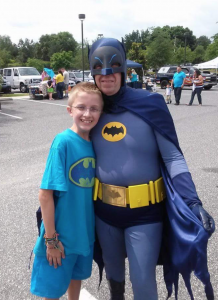 “Carla helps out on in so many things … costumes, photography, our eyes and ears when we are in character so we don’t miss a child that wants to meet a super hero or a princess that is walking around,” he says.

But why do Cosplay? What are the benefits cosplayers enjoy?

“The cosplay community is fantastic if you have a question or a costume issue someone is willing to help out orsuggest a way to make or fix the issue.

Cosplayers come from all walks of life and I recently read about a man who was 94 years young cosplaying as Captain America and he was terrific. It’s not about who has the most expensive or screen accurate costume but about having fun and talking about similar interests. Cosplay keeps me young. I’m constantly learning new things and meeting great people,” he adds.

What about when Moore was a kid? Has he been wearing costumes since a child?

What kinds of costumes did he wear then and does that influence the ones he chooses now?

“I remember my mother making me capes to be Superman, Batman or even Dracula. From grade school to high school, I’ve always been involved with drama club or plays. It was always thrilling to become someone else. I try to choose a costume that I’m going to be able to wear in support of one of the groups I belong to, and of course who I want to be,” he says.

Costumes do bring out reactions from people. 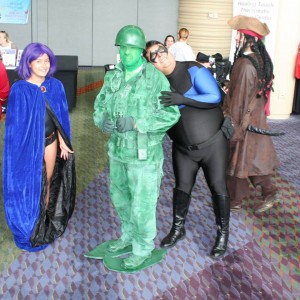 Some scare children. But Moore says that recently when he was at a con in Tampa where he was in costume as a toy Army man, actor Barry Bostwick stopped and poked him and said he was impressed with his costume and the fact that he wasn’t trying to scare the children when they came up to get a photo.

“He took the time to listen to me talk about my charity groups and told me, ‘good job, keep it up.’ I get high fives from adults remembering Adam West’s Batman and telling me that they love the classic Batman. Making someone smile is what it’s all about.”

Costumes he has owned include the 66 Adam West Batman, which was the first costume he made, currently his favorite….