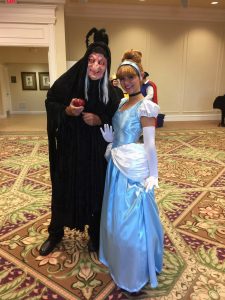 residents enjoy the most costumed holiday on the calendar. Instead of trick-or-treating, residents, children, and even some dogs (festooned in their own splendid canine costumes) converged upon the clubhouse for a grand Disney-themed party! Additionally, volunteers from the community were proudly bedecked in costumes designed and sewn by the Guardians’ own Elizabeth Hall.

The party roared with about 100 children scurrying about the scene visiting Disney heroes and villains. They shared goldfish crackers with Ariel and Ursula, played with stuffed Dalmatian puppies on a rug 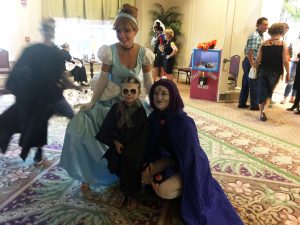 presided over by Cruella, and ventured out to the lawn to jump and tumble about inside a massive bouncy-castle! Cinderella was an instant favorite and, while she failed to leave behind a shoe, left magical memories with many of the smallest party-goers. Happily, as Maleficent was invited to THIS party, she could find no excuse to give a curse to anyone at all, but did take pictures with several children who staunchly protested that they were NOT scared of her. Raven found herself a bit out of place in a Disney world, but the kids were blissfully uncaring, particularly one little girl who demanded a photograph for her sister, whose favorite Teen Titan was, of course, Raven. 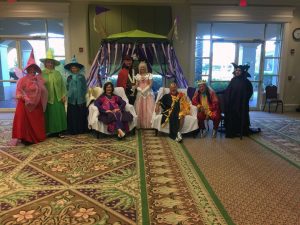 At 7 pm, the parents and residents excused themselves from the party to line up along the sidewalk with bags and cauldrons full of candy to distribute. King Triton, Raven, and Cinderella got the children lined up and the parade began! Treats and candies of every description passed from hand to hand – the most delectable skipping the plastic pumpkin buckets and going straight into the children’s mouths! Maleficent brought up the rear with a glowing staff and an austere eye for any adult who dared to be less than generous with the candy allotments. It was a wonderful evening for child, parent, and Guardian alike!